A portal between worlds... in the bottom of a wine glass - Natania Barron's Mad Pursuit
Home writing

A portal between worlds… in the bottom of a wine glass 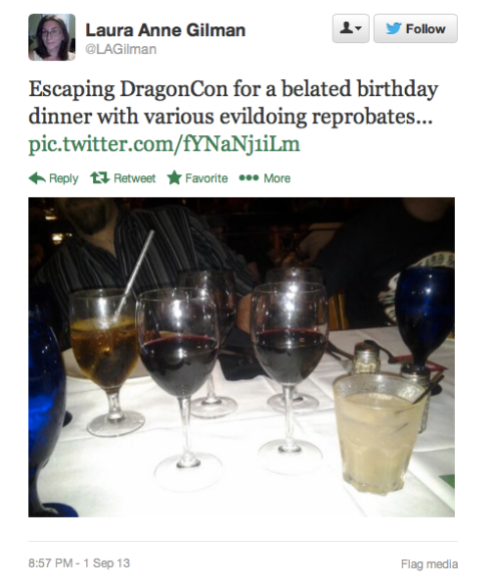 I’ve spent the last weekend at Dragon Con in Atlanta, with beloved friends of all stripes–some of whom I get to see here in NC, others who I hardly ever get to see (or I only see virtually). It was fantastic, a welcome diversion from general life as mommy, etc., and while I missed my family I should point out that it was way more fun than I thought it would be.

My brain is so tired it’s practically wobbling, but I laughed so hard the last days and nights (staying up far, far too late) that my soul feels revived. Friends, wine, and words. It just doesn’t get much better than that.

Which is not to say that after a (blessedly) uneventful six hour drive back home (the drive down was almost 9 hours) I’m ready for another party. I could definitely have done without some of the crowds and whatnot–indeed the best part of the convention had a lot less to do with the spectacle and much more to do with the company.

I took a few pictures–far too few. This update from Laura Anne sums last night up best, though (see inset)

I also like to think Keats would have been a fantastic dinner companion last night. I’ve always loved his little giddy rant on claret, from his letter to George and Georgiana Keats in February of 1819:

… now I like Claret, whenever I can have Claret I must drink it–’tis the only palate affair that I am at all sensual in… If you could make some wine like Claret, to drink on summer evenings in an arbor! For really ’tis so fine–it fills ones’ mouth with a gushing freshness–then goes down cool and feverless–then you do not feel it quarreling with your liver–no, it is rather a Peacemaker, and lies as quiet as it did in the grape…

Now, to acclimate myself back into the real world.

A brief look through time at Sir Gawain, and some insight into the new film by David Lowery.
Read More
1 Shares
1
0

Nothing quite so photogenic as bees in passionflowers. #gardening…

It’s been a doozy. Summoning up the writing spirits anyway. #amwriting…

My daughter frolicking in the blood moon. #moonlight…

Howdy. Feeling blue (in a good way). Heading to the beach to spend a…

I like this one. He’s my human. After a pandemic, almost 17 years of…

Thankfully the only thing that eats the globe thistles is bees. The deer…

I can see Dolly’s house from here. #pigeonforge #tennessee #smokymountains

Daphne. Who knew I needed art so badly? Me. That’s who. #ncartmuseum…