I didn’t hear “Stairway to Heaven” until I was about 18. I’m not sure how that happened, exactly. I was a huge classic rock fan, and musician to boot. I found Zeppelin when I was about sixteen, and had listened extensively to their first and second albums (which I had on vinyl and had copied over to tape). I remember standing in the kitchen at our house in Massachusetts, cooking something (as usual), and my dad telling me to take a break and listen to the solo in “Good Times, Bad Times” because it was one of the greatest in the history of rock ‘n’ roll. He was right, of course. But how I never made the leap to other albums, I’ll never know. It’s sort of like loving the Rolling Stones but never hearing “Paint It, Black” or “Satisfaction.”

But “Stairway” eluded me. I was a Beatles fan, and primarily listened to them during those teen years, only dabbling occasionally into other rock albums if I found them at yard sales or scraped together enough money to buy a casette (the only Beatles albums I ever bought on CD were the Anthologies). I didn’t like radio much. The only reference I had to “Stairway to Heaven” was in the movie  Wayne’s World (a movie which I still know by heart), when Wayne goes to the guitar store and starts playing the opening notes only to be pointed to the sign: “No Stairway? Denied!” (They’re actually not the opening notes, and more on that here. No wonder I was confused.) 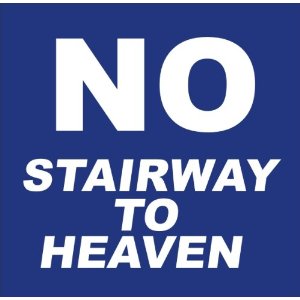 So, in my mind, “Stairway to Heaven” had a completely different feel. It was Zeppelin, so I assumed it was pretty gritty. I thought there had to be some blistering solo, lots of drums, heavy vocals complete with panting and Robert Plant’s signature orgasmic keen. It’s like, in some alternate universe, there’s this song called “Stairway to Heaven” that I made up that, well clearly, is virtually nothing like the actual song.

I know where I was when I first heard the song. I was at a computer. I believe I was listening to an early iTunes radio station (as music got easier to access, so, too, it got harder to avoid). The song was introduced, and I remember thinking: “Okay! Here goes!” and then… wait, what?

“Stairway to Heaven” might be one of the most recognized songs in the history of rock ‘n’ roll, but having avoided it for almost twenty years makes my experience completely different. Since this was before the huge popularization of the internet, I never searched for lyrics. I didn’t know there were Lord of the Rings references. I had no idea how gentle and emotive Plant’s voice was, nor how magnificent the solo during the bridge would be (and yet restrained and longing and perfect); the rhythm section is crazy good, and the whole song peters out in echoing longing like nothing I’d ever heard before. It was an experience, to say the least.

But it wasn’t that song that was in my head. That song, like so many of our imagined realities, doesn’t actually exist. Or maybe it might someday. Maybe on another plane, some alien with a space-guitar is playing the notes of that song. I might never hear it, but it somehow exists. Even though it doesn’t.

This is all to say I’ve been thinking a great deal about perception, imagination, and experience. As writers and creators, we are a mishmash of these three facets. Just because we experience something doesn’t mean we perceive it; and just because we perceive it, it doesn’t mean it is as we imagined. When writing characters lately, I’ve been working very hard to think about these facets in their stories. Both are first person narratives, and both are telling their stories. Kate in Rock Revival is writing her story down for her daughter; Joss in Watcher of the Skies is telling his story to Maddie.

But their experiences are not mine. And even if, like Kate, they share my experiences, their perceptions aren’t the same. And their reactions, depending on how they imagined things going or not going, also differ greatly. What might be old and busted to me, may not be to them. Joss starts out the book as a godling in a man’s body, unable to tell clothing apart from skin. But he learns quickly, even if there are still some holes in his learning. He’s gifted to understand human emotion on a deep level, but that often gets him in trouble–just because you perceive something, doesn’t mean you should mention it (which he has a problem doing). And Kate, for all her tough talk, is an active alcoholic for the first third of the book. And even though it almost kills her, she still doesn’t really perceive it correctly. She’s unreliable, especially when it comes to her own faults (aren’t we all).

But back to those unheard melodies. Yes, I’m bringing it around to Keats again. There’s two stanzas in “Ode on a Grecian Urn” that talk precisely about what I mean about that unheard version of “Stairway to Heaven”:

Heard melodies are sweet, but those unheard
Are sweeter; therefore, ye soft pipes, play on;
Not to the sensual ear, but, more endear’d,
Pipe to the spirit ditties of no tone:
Fair youth, beneath the trees, thou canst not leave
Thy song, nor ever can those trees be bare;
Bold Lover, never, never canst thou kiss,
Though winning near the goal—yet, do not grieve;
She cannot fade, though thou hast not thy bliss,
For ever wilt thou love, and she be fair!

Ah, happy, happy boughs! that cannot shed
Your leaves, nor ever bid the Spring adieu;
And, happy melodist, unwearièd,
For ever piping songs for ever new;
More happy love! more happy, happy love!
For ever warm and still to be enjoy’d,
For ever panting, and for ever young;
All breathing human passion far above,
That leaves a heart high-sorrowful and cloy’d,
A burning forehead, and a parching tongue.

The stories he’s making up in his head are better. All that panting, excitement.

That’s not just the scene on the urn, that’s Robert Plant! That’s my song. The one that doesn’t exist. It’s also every book I’ve yet to write. It’s every song and melody I’ve yet to play. And no, it’s unlikely that it’s ever going to be as good as the one imagined. But, with each successive attempt, it gets better. It gets closer. That’s what makes art and imagination so mind-blowing. We are pulling something from nothing, bringing art into the world through our eyes and hands. And nothing will ever be just like it.

And because it’s so awesome, here’s Heart covering said song recently. I can’t love this more if I tried.

Why I Don’t Give Writing Advice

And now for something completely… ugh!

Masks and Malevolence Cover Reveal, and Some Notes