It was in the 70s today here in North Carolina. After a few weeks of absolutely amazing weather–chilly and in the 50s during the day, scooping down into the 20s at night–we’re in a bit of a mini heatwave. The flannel sheets seem rather preemptive. But I guess that makes sense. This week has been... / READ MORE /
/ Natania Barron /

We put up the tree. An angel I love from my childhood, and one of my son’s handmade ornaments. Image by Natania Barron, CC BY SA 3.0

It was in the 70s today here in North Carolina. After a few weeks of absolutely amazing weather–chilly and in the 50s during the day, scooping down into the 20s at night–we’re in a bit of a mini heatwave. The flannel sheets seem rather preemptive.

But I guess that makes sense. This week has been a study of contrasts, and not just seasonal ones. My husband was laid off on Monday last, his entire department vanishing into “we’ll give you some contractor hours” and that’s that. I’m trying to stave off the panic and dread (and fury; I assure you there is plenty of fury, considering everything we’ve been going through the with boy and, oh, having a six month old baby in the mix) by keeping busy around the house, which isn’t too hard considering there’s two kids around here most days. Also, we’ve started brewing beer again. We’ll have a chocolate maple porter ready next week when I get back from New York, and a hopnog (which I’m affectionately calling the “Non-Working Man’s Hopnog” in a nod to one of my favorite Fullsteam brews, Working Man’s Lunch; the brews aren’t remotely similar, but the name couldn’t be passed up). I don’t know what to make of the jobless (again) situation. I’ve been trying to avoid it by making beer and bread and crocheting and writing and crafting. As I tend to do. 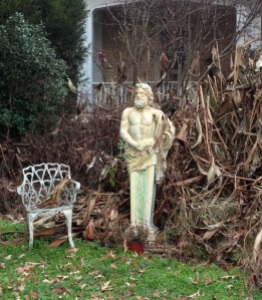 Joss Raddick. Hanging out. Looking around. Image by Natania Barron, CC BY SA 3.0.

The highlight of last week came in the form of the always lovely Cherie Priest who was in town, a last stop in a harrowingly eventful tour in support of her very awesome book, The Inexplicables. When she indicated she was up for shenanigans in the afternoon, I contemplated for a second and asked her if she’d fancy visiting a graveyard. I had a feeling I wouldn’t have to twist her arm, mistress of Southern Gothic that she is. We visited the Old Town Cemetery in Hillsborough, NC, which is one of the most hauntingly beautiful places I know. We saw the gravestones of a variety of prestigious residents, including William Hooper, one of the signers of the Declaration of Independence. Hillsborough has plenty of Colonial roots, and having lived there once I was truck with how much I missed it. I wanna go back. Sigh.

Extra bonus, Joss Raddick showed up in the form of a lawn ornament (see picture).

The event at Flyleaf Books was great, and we stayed around and drank beers afterward. Much needed beers, especially in my case.

And now we’re turning the corner into winter. I’m going to be flying out next week to NYC to do a media tour for the Geek Mom book, and I’m excited and a little nervous. I’m going to be on television! I’ve been trying not to fuss over wardrobe, but I’ve been fussing anyway. I found a perfect dress, but now I have to locate the right size. Tomorrow, I get my hair cut a bit (not a huge amount, but it needs some serious taming, as it’s now down to the middle of my back and, especially in the static electric season, absolutely unruly).

Writing has continued on Watcher of the Skies, and it’s going well enough that I figured it was time to send out Rock Revival to my beta readers: Michael, Dorothy, and Karen. In a bout of insomnia, I read the entire draft last night and today in .epub format–which is beyond awesome. I didn’t realize Scrivener had those capabilities until just yesterday, and it makes the beta reading experience so much easier. Michael is my toughest to please beta reader. I know, he’s my husband. He’s supposed to adore everything that I do, right? Except he’s not like that (THANKFULLY). He’ll tell me if he isn’t enjoying something. Last night he stayed up “way later” than he should have, reading the first quarter of the book. This gives me significant hope, considering that I’m nearing the point of no perspective. Suffice it to say, hearing him say that was immensely and overwhelmingly welcome. Like I said, it’s been a tough week.

And that’s really it. The month of November may be over, but the holidays are approaching and, before we know it, we’ll turn the page to 2013. Our hopnog will be ready for consumption on New Year, and I can’t wait to try it. We had a sip tonight and it was divine.

Sometimes it’s the simple things that get you through. Words and the magic of fermentation. That doesn’t sound very romantic or magical, but I assure you, it is. It helps to move on and worry less, even when there’s so much uncertainty in the air. If winter teaches us anything, it’s that in the coldest, darkest places, beauty and wonder still abounds.

DON'T MISS THIS ONE: Announcing The Frost & Filigree Quartet

These Marvelous Beasts is Here!

Writing Advice from Samatha Bryant: There is no magic feather, Dumbo.

A (Sort of) Yankee Girl's Guide to Boiled Peanuts
1

There Are No Guilty Pleasures in Reading