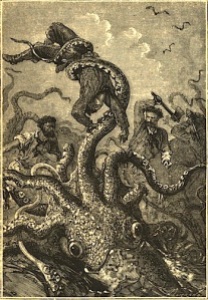 Two Things I Loved: It’s an Ash chapter, so that’s always a blast. He’s the easiest of the POV’s for me to get into (no idea why, it’s not like we’re anything alike) and there’s always that unexpected element with him. Two best points of the chapter are probably his command over the crazy situation (as someone has come into their midst with a squidling implant) and then his horror at the extraction process. I like the contrast, makes the character so much more three-dimensional. Hell, Ash is probably multi-dimensional.

Two Things I Loathed: I’m pretty happy with where this chapter is going, but I have A Big Decision to make regarding the fate of one of the character’s lives. It occurred to me that they might die at some point, but I’m trying to separate my desire to kill him off with the book’s actual plot. I honestly think, after some considering last night, that the death has great meaning in that it works as a catalyst for the other characters. But as this chapter is coming to a close and I’m wavering on the details a bit, the writing’s lacking.

Best Quote of the Day:

“We don’t have direct methods for getting rid of the implant squidlings, save for one…” said Wolstone.

“Great,” Ash said, not needing further elaboration. “You can fecking heal open wounds and call fecking fire from the fecking air, but you can’t deal with a simple fecking squidling?”

Marna was lost in the conversation. Ash felt her hand on his shoulder before she even spoke and he immediately regretted his tone. “What are you talking about?” she asked, looking straight at Wolstone.

The bard swallowed. “Our policy is to kill the body.”

Worst Quote of the Day:

Ugly was an understatement. Ash had seen bullets removed from men; hells, he’d seen men’s head practically explode from the force of an injury, and once right under an upturned carriage.

But nothing prepared him for what happened.  And while part of him wanted nothing more than to be gallant and supportive of Marna—technically his employer and, more recently, the subject of some rather detailed fantasies—he could do nothing other than sit in horror and watch.

Thoughts of the Day: Like I mentioned before, lots of considering death. Lots of violence and horror and gore in the last few chapters, and there’s really no end in sight. This is dark magic, kids. Proceed with caution. But I do worry about balancing the darkness with humor (see the attempt up there under “Worst Quote”) as well as a feeling of hope. The real challenge is going to be bringing Dev back into the present narrative, on earth and not his spiritual journey, and where he ends up appearing should be somewhat of a surprise. Hoping so, anyway.

Also, finally settled on some terminology. The term I now use is “squidling implant” rather than “receptors” or “bugs” (though the last one Ash uses, because that’s his opinion of the things). I spent a good hour last night reading up about some of the specific details about the squids I’m modeling these little brain suckers after. I did not know that squids have only two tentacles… which is surprisingly helpful in my magic/science theories for how they work in the context of the story. Yay science!

As well, I’m not sold on the working title of the book. I originally called it Dustman since the drugs so prevalent in the story line were going to be called dust. Then I went with essence and well, Essenceman doesn’t have a ring to it, does it? Worst names considered so far Squid Pro Quo and Tentacular! No, no. Beneath the Red Temple sounds too much like a D&D campaign. The Walker sounds like an episode of Texas Ranger. Going to have to do some more thinking about this one. Usually the names come so easy…

Around the Bend: As happens throughout most of this book, Ash’s narrative abuts Marna’s, and so this chapter will continue from her point of view (current chapter, “Found”–next chapter, “Lost”; see what I did there?). Then it’s dealing with Dinah, then back to Dev’s final battle with his beastie before heading back to Ardesia. Lots of loose ends, lots of exploding, lots of crazy dark magic, finally uncorked, and the Hand behind it all. No small task! 30K to go, give or take.

Escapism of all stripes

Take the Queen of None – Which Arthurian Character Are You? Quiz