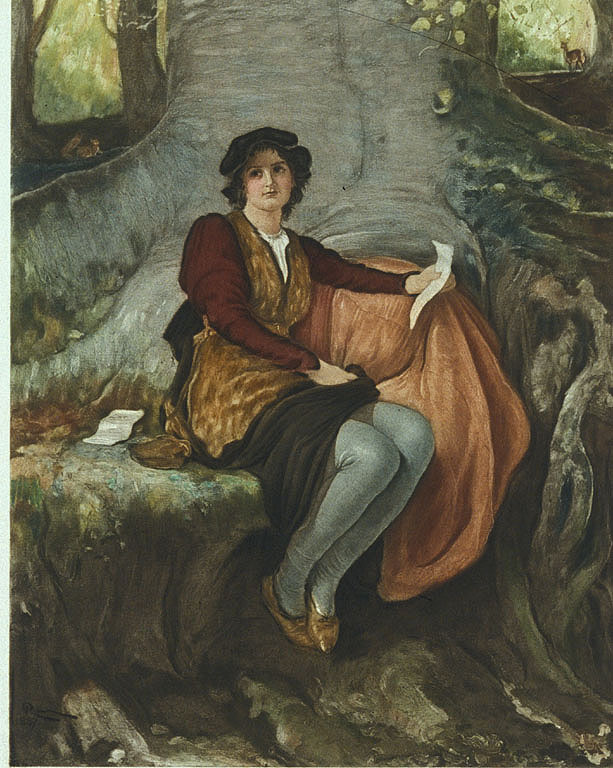 Because fantasy literature is derived from a mythological tradition steeped in masculine strength and honor, it is often cited as one of the worst offenses when it comes to gender biases. I mean, heck, you don’t have to look much further than SF/F aisle to know that boobs and bodices are really one of the hallmarks of the genre. I’ve talked about this at length before, from a feminist perspective, but the last few days I’ve been thinking about this in a much broader sense.

I mean, it was hard enough for me as a woman to find characters to identify with in fantasy. By and large, even in adult SF/F, female characters are few and far between, and most are signficiantly lacking, especially in the male-dominated “canon”. Women, even if they are the center of the novel, tend to either be a) defined by their sexuality or b) forced into masculine roles to be “taken seriously” as a hero. It’s eternally frustrating for me to read a book and constantly feel off-put by the portrayal of women (recent exceptions I’ve found lately include Elizabeth Bear’s Elaine Andraste in Blood and Iron and Emma Bull’s Mildred Benjamin in Territory).

But for every complaint I have from a feminist/women’s perspective, I can’t even begin to stack those for people of other gender identities and sexual orientations. If there are gay characters in fantasy, often it’s done either a way to titillate (especially with the portrayal of lesbians) or to demonstrate some kind of dementedness (often done with gay men). Or, sometimes, the character’s unexpected sexual orientation is simply a way for us to feel bad for someone who’s closeted and, of course, rather melancholy about it. Or, my personal gripe, a gay character (most often a woman) who is “turned” by someone else into a wonderful, fulfilling, heterosexual.

What I don’t understand  is why more writers don’t push this envelope. Moreso than any other genre, fantasy and science fiction writers have the opportunity to recreate societies and construct worlds where our concepts of gender and sexual orientation can be challenged. But there seems to be general resistance because, as the Big SF/F Writers that have come before us have kept in the safe zone, so too do many others. When J.K. Rowling announced that Dumbledore was gay after she finished the books, I was absolutely furious that she hadn’t at least given it a footnote. This is a woman with incredible reach, but she felt that his sexual orientation wasn’t pertinent to her story, and though the reaction was positive from most, I wish she had at least given a window into this. So many kids struggling with gender issues would have been put at ease knowing that one of the most powerful characters in the Potter universe was a self-confident, compassionate, wonderful gay man.

My road to my perspective on this subject is a long time coming. I was brought up in an Evangelical church, in the middle of Northampton, MA, where Smith College is. For those not in the know, Northampton is a funky, eclectic, beautiful city that is called, at least by some, the “lesbian capital of the US.”  And let me tell you, if you’re brought up in a church nearby, chances are you will quickly learn who Others are.

I remember spouting off anti-gay crap one dinner with my step-grandmother when I was ten or eleven, bascially regurgitating the things I’d heard from adults. My take was that it was really funny. Gay people are funny! And eww, how could they kiss in public? My grandmother set me straight very quickly, and I am grateful she did. She leveled me with a stare and said, “So you don’t think that people who are in love should be able to show affection for one another public?” I had nothing to say in response; I felt ashamed, immediately. I had never thought about it that way. To me, the gay community were Others, and therefore, less human, let complex, less worthy of compassion.

It didn’t take long for me to actually meet people who challenged my long-held prejudices, either. Like actually gay, lesbian, and transgendered people. Beautiful, wonderful people who had survived unbelievable childhoods. By the time I was in graduate school, reading medieval texts like “Silence” (where the main character, a woman, passes as a man) and contemplating Portia and Rosalind in Shakespeare, I was forever changed. Thank goodness.

So how does this fit in to my writing? I realized, the other day, as I was cataloging my work and works in progress, that every single substantial work I have is diverse from a gender perspective. And it’s not that I sat down and said “this character is gay, and loving it!”. No, these characters are fully developed people that just happen to be gay, or bisexual, or (as in the case of the entirety of the Sibs in The Aldersgate) completely genderless. For the latter, I even had to create new pronouns in order to properly represent them in the text, which was a big challenge. But so far, readers have said that the Sibs are the most intriguing, most unique part of the book. And that makes me very proud. I mean, what’s the point of creating new worlds if you can’t write the rules yourself?

Whether or not we are aware, we write our fears and our prejudices into our writing. And mythology, as beautiful and replete with images and inspiration, is often one of the worst offenders (I mean, read “Beowulf” and you get my drift). Because fantasy and science fiction are derived from these traditions, writers often stay within a safe area where men are men and women wear chain mail bikinis. But if the full capabilities of the genre are ever to be realized and appreciated on a larger level, it’s essential that we push the borders of comfort and expectation regarding sexual orientation and gender identity. As one of the largest consumers of SF/F are young adults who, at the crossroads of their lives are most susceptible to the opinions and are most often struggling with these very issues, it’s a responsibility we should take more seriously.